At The Lifetime Value Company, we ingest multiple sources of public record data to give our users accurate results for the searches they perform. Data processing is essential for our business, and we are constantly looking for ways to improve it.

Our current official tool for automating processes is an Apache project: Apache NiFi. But we were looking for a replacement because it isn’t managed, takes time from our engineers every time it fails, and is hard to track changes made to the flows. We have a process that is run manually via shell commands and needed to be automated. So we decided to give it a try on Apache Airflow.

We extracted a slice from a larger process to be automated using Apache Airflow for the first time. The task that we wanted to automate was to read multiple zip-compressed files from a cloud location and write them uncompressed to another cloud location.

"Airflow is a platform to programmatically author, schedule and monitor workflows."

To start understanding how Airflow works, let’s check out some basic concepts:

But also for the following reasons:

"Cloud Composer is a fully managed workflow orchestration service that empowers you to author, schedule, and monitor pipelines that span across clouds and on-premises data centers. Built on the popular Apache Airflow open source project and operated using the Python programming language, Cloud Composer is free from lock-in and easy to use."

We looked for a managed service and were already using GCP in other projects, so Cloud Composer was the perfect fit.

Installing Airflow in GCC is much simpler than installing it natively or using it via Docker, which gave us permissions and volume headaches.

We followed Google’s guide. The only required step is to choose a service account that has the composer.worker role. If not, it will take approximately 45 minutes to tell you that it failed to create the environment because of this simple requirement.

What to Run How and Where

In the presence of such an extensible platform, there is more than one way to skin a cat. In search of the least amount of effort we initially came up with this list for defining how to accomplish each task:

As we went through the above list, we found the DataFlow operator. Cloud Dataflow is Google’s managed Apache Beam, so while investigating, we discovered that it had transform for zip decompressing. After discovering this, we decided to go down that path. We installed Beam in the cloud instance and did the quick start.

We initially tried the native Dataflow operator’s zip transform for decompressing our file. However, it did not work because it wasn’t able to decompress all files from a multiple file archive, and only decompressed the first in the archive.

After reading the blog post We’re All Using Airflow Wrong and How to Fix It, we agreed that it was the best approach for using Airflow and had these advantages:

But we disagree with the article’s tl;dr: “only use Kubernetes Operators.” We still think that very simple tasks should be accomplished using some of the provided operators to avoid the extra effort.

We could have written a single main function and moved forward, but wanted to establish some good practices to follow for writing these in the future:

For dockerizing Go apps it is common to use the Golang image, and it works perfectly, however, since Go compiles to binary the final image does not need to have Go installed in it.

We actually want our docker images to be as lightweight as possible, since we want tools to do exactly one thing and do it right.

For creating our docker image we decided to use a Multi-Stage technique, which we found as a very simple and accurate way to fit our requirements. By reading this article Multi-stage Docker Builds in Golang with Go Modules we realized that this was what we needed.

In the creation of the Dockerfile, there are two defined stages, which allow us to accomplish the goal:

Our docker image will be reduced down as we expected and now we have not only a small but clean image.

Google Cloud Composer creates a Kubernetes cluster with 1 pool of 3 nodes. When you run tasks using the KubernetesPodOperator it is recommended to run them in a separate pool.

In our case, we knew that the largest file consumes 6GB of memory when decompressing, so we needed to make sure the pool had at least one node containing more than that amount of memory available.

To upload our dockerized tool, we need to add the image and push it to the project’s Container Registry. There is a simple quickstart to do so.

It can only be done directly in Kubernetes using the CLI;

We know that this job consumes much more memory than the first sample. To avoid OOMKilled and Evicted errors, we created a pool with a 15GB node to account for the overhead, specified request memory of 7GB, limit memory of 10GB and configured the operator to use this pool.

Multiple Files and a Case for Dynamic Tasks

Although dynamic tasks are indeed a feature, there needs to be some caution about how they are used as they are evaluated on a different schedule than the DAG run itself.

As a concrete example, we wanted our DAG to search for all available zip archives and be built based on this criteria. We could have written a routine that pulls out the list of files and then build the DAG looping through the list (one task per each), but that would have put a big burden on the scheduler that evaluates the DAGs, as explained here.

A) Have each task internally work with a list.

B) Write more complex DAGs or a composition of multiple DAGs. As shown in this set of two articles:

To move on, we decided to hard code the list of possible files. We acknowledge it isn’t the cleanest approach, but we just wanted to finish experimenting with DAGs that are dynamically created.

Our Pattern for Multi-Threading

So we had a solution for processing N amount of files without having to write a task for each. Then, we wanted to figure out how to process them in parallel without exhausting our node capability.

What Airflow provides is a language for defining dependencies: one task doesn’t run until another one succeeds, so we figured out that one way of decompressing every image file was to divide them into two groups and write two sets of dependencies:

Once knowing that it worked, we expanded the same idea to N threads:

Move on in the Event of a Failed Task

Airflow has a special operator called DummyOperator which does nothing itself but is helpful to group tasks in a DAG, when we need to skip a task we can make a dummy task and set the correct dependencies to keep the flow as desired.

Last thing we needed to solve was to allow the process to move on in the event of a failed task. The reason for this was that we were hardcoding the list of files and we know for a fact that our list wouldn’t be consistent every time, thus a missing file would cause the unzip task to fail and the downstream tasks to never run. So, we included some DummyOperators and made use of the trigger_rule that every operator has:

The above DAG, but with all the files (more than 50) breaks the UI when trying to display its Tree View. This behaviour appeared when we ran multi-thread DAGs without setting any memory related configuration. 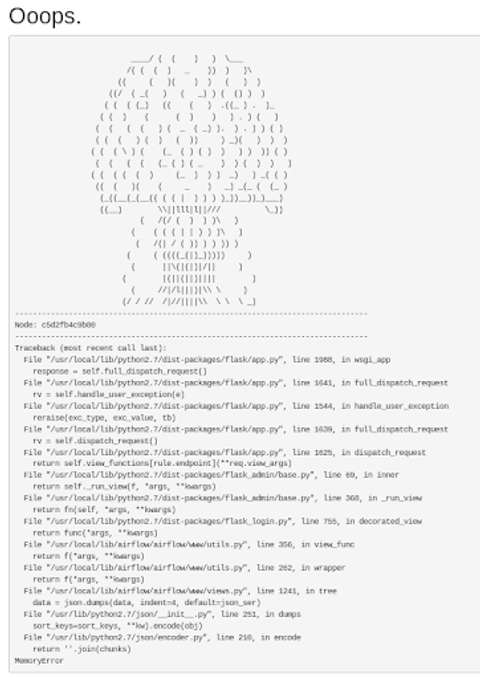 When updating the cluster’s version, we realized something went wrong which made our Airflow environment stop working. New DAGs were not able to be built and existing ones wouldn’t start running when triggered. Looking back at the log, all Airflow default containers failed to restart after the update.

As an experiment, we changed the configuration of the Kubernetes pool and enabled auto-scaling. It worked almost perfectly fine; some tasks failed on the first attempt but just setting retries on them allowed the DAG run to finish. It created nodes as needed while it was running and ten minutes later they were turned off.

An important point that showed up while trying auto-scaling is that thread control is not necessary, as this configuration creates nodes if there aren’t enough resources available for tasks to start.

As an attempt to test more competencies, and show what else it can do, we made some changes to our DAG in order to allow pods to request memory dynamically. Since we worked with a hardcoded list of filenames, we adapted it to be a dictionary including each file’s size as a value, in this way we would be able to set each container size based on the size of the corresponding file to be processed.

We decided to avoid thread control since we set node auto-scaling and retries on. The attempt ran smoothly. 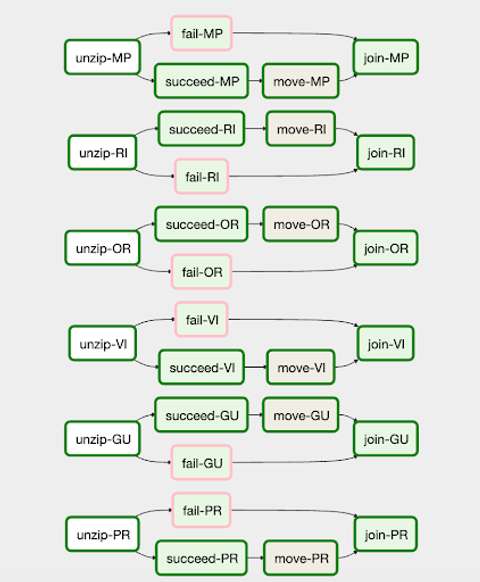 This is the status summary of the running DAG, as we can see it is a large one containing more than 200 tasks, and it all worked perfectly under our latest version.

After all our experiments and lessons learned, we finally came up with our last version which we are currently using as the best fit for us in this specific problem.

We decided to define groups of files to be processed by alphabetical order and set up enough memory resources to support any of the tasks. We modified our unzipper Go tool to accept wild cards, so we can process multiple files by just one call to the program. In this final version, we added a rename task (which is another in-house built Go implementation) and a simple list task using a BashOperator. 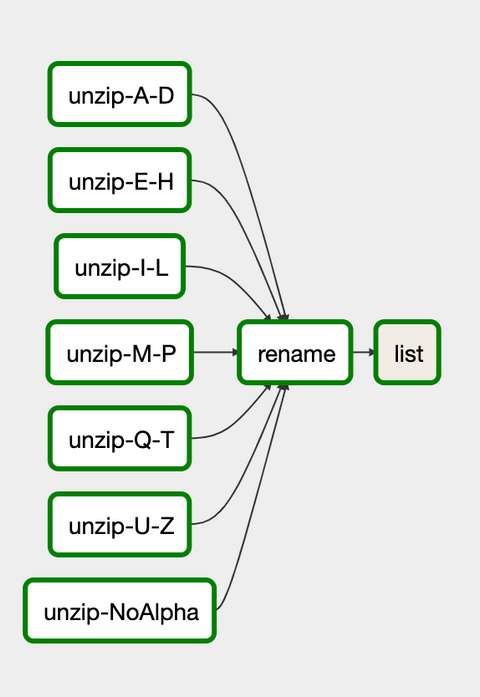 Roll Out Features With Confidence!